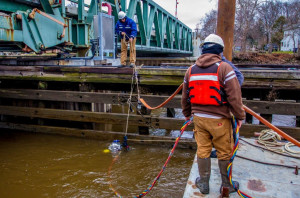 In 2015 The Castle Group was awarded the contract to locate and remove the existing submarine power cable and install new submarine cable at the Riverside-Delanco Bridge over Rancocas Creek. The existing cable was located at both the upstream and downstream fascias. A survey was performed prior to start of work to verify the exact location of the cables to be removed. Both scanning sonar and side scan sonar imaging were performed to accurately locate the exposed portions of the cables. JW Fisher cable tracker was used to locate the buried portions of the cables. All work was done from a 30’x70’ work barge. The new cable was installed along the upstream end of the bridge spanning between the South Abutment to Pier B, with the end attached to the Center Pier. The cable was cut to fit on site and buried 4 feet into the channel bottom. Two rows of concrete bags were placed on top of the cable to prevent future erosion/scour. Upon completion of the installation of the cable, an as-built report was submitted including; the final survey plan, as-built drawing, and side scan imaging performed to verify the condition of the buried cable. All work was completed by February 2016.