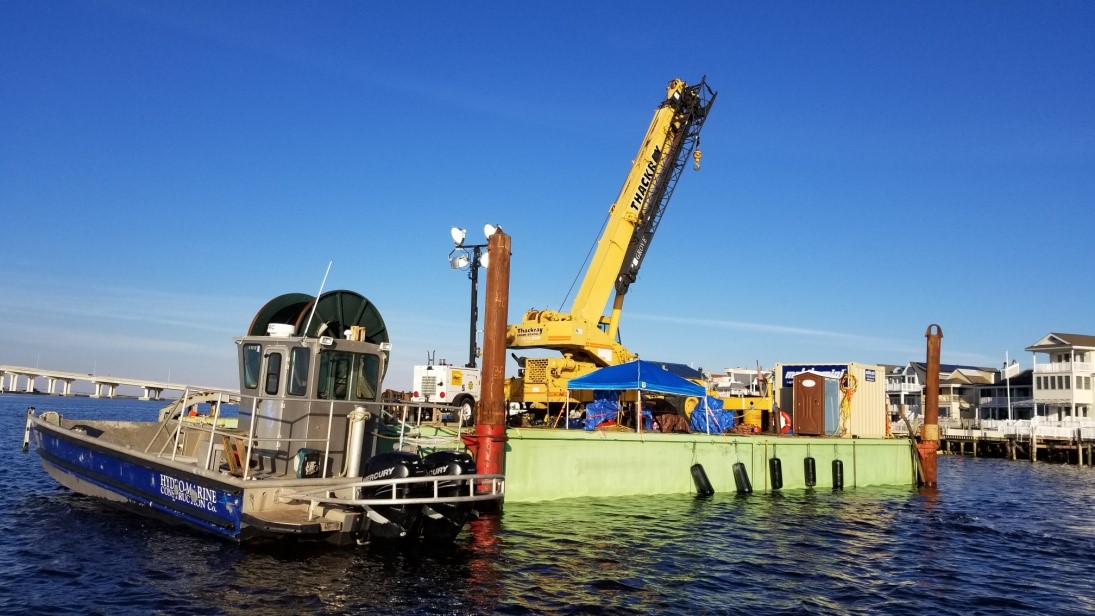 In January 2018, one of the power cables was determined to be damaged and in need of immediate repairs. As one of the most experienced local providers of this type of cable break service, Hydro-Marine Construction Co., Inc. was promptly retained to locate and repair the cable. Hydro immediately began coordination with the Coast Guard to allow for temporary blockage of portions of the channel in Great Egg Harbor, where the break was located, and setup the emergency mobilization of all required barges and other in-house specialty equipment specific for cable break repairs. The site was staffed 24/7 to assure safety and facilitate a quick repair.

The first task was to locate the buried cable; approximate locations were known, but a dive team is still required to jet the channel bottom in the area in order to determine the exact location and pull the broken cable. Next, the extent of seawater infiltration into the cable was determined by topside owner personnel. The damaged area was removed and a new section of cable was spliced onto the existing. Typically, this kind of damage is found in the middle of a cable off-shore, but in this case, the portion to be replaced extended through an existing seawall. The cable could not be simply spliced in and laid back onto the channel. Hydro used an innovative combination of flotation devices, equipment and dive personnel to pull the new, extremely heavy cable from the barge towards the shore and through an opening the bulkhead. All repairs were successfully completed within approximately 3 weeks.