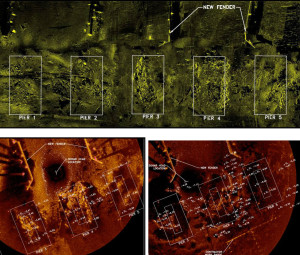 In 2016, W.J. Castle, P.E. & Associates, P.C. completed the post construction & debris removal investigation for the removal of the original pier foundations. A new bridge was constructed just north of the original bridge and the original piers were cut down and removed. Castle performed a side scan survey and scanning survey of the construction site to determine the amount and locations of the construction debris remaining on the channel bottom. A dive survey was performed after the sonar imaging was processed to investigate specific areas of interest. The inspection findings were documented in a report including both side scan and sonar imaging depicting the areas of remaining portions of the original pier. After additional debris removal was performed by others, Castle completed another scanning sonar survey of the channel bottom to verify the debris was removed in accordance with the County’s requirements.