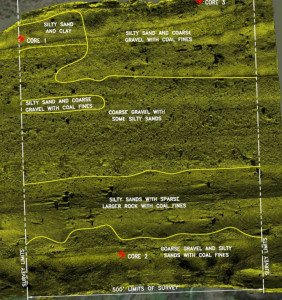 Sediment Study for Seven Sites on the Kanawha River Near Charleston, West Virginia

Four levels of study were performed for the project: a single beam hydrographic survey, a side scan sonar study of the area, a sonar sub-bottom profiler mapping of the area, and core and grab samples of the channel bottom obtained by both divers and a VibeCore.

Images from the side scan sonar were correlated with the core samples and sub-bottom profiler data to determine both surface and underlying sediments on the river bottom.

All field work was completed for the seven (7) sites in two (2) weeks and data processing was done in-house.